Reuse and the Value of Story

Meet Old Fir – the upcycled early 1900’s Douglas fir door and star of today’s blog post. We’ll be following Old Fir’s journey from the old growth forests of Washington state to a Ballard school turned museum, and finally to a beach cottage on the coast of Southern Washington. We’ll discuss why we felt it was important to upcycle aka, “rescue” this door, giving it new life, and we’ll take a look at why many people are now looking more deeply into the ideas surrounding reuse, upcycling, rescuing, and adaptive reuse with parts of old structures and in the transformation of entire structures as well.

We start our story in 1792, when British explorer George Vancouver traveled aboard the Discovery through the Strait of Juan de Fuca. He described the land he saw as “luxurious,” “…the appearance of a continued forest extending as far north as the eye could reach,” and “…impenetrable wilderness of lofty trees…” Around 50 years later, Charles Wilkes, Commander of the United States Exploring Expedition of 1838-1842, described the trees of the area as follows: “…although they are saplings, were 6 feet in diameter and upwards of 200 feet in height.” “I could not control my astonishment,” he said, regarding the size of the trees.

Eventually these types of exploration led to a booming logging industry that has unfolded over nearly 200 years, starting with the Hudson’s Bay Company. Back in those days, logs would be hauled by oxen, rafted together to be towed by boats to mill yards, and then transported via rail and ship to various locations around the world where craftsmen would create panels, doors, furniture and all the other living necessities from this aged wood. Plenty of that wood would serve to build the foundations of the towns and cities of the Cascadia bioregion and the entire Pacific Northwest.

Before the logging boom, the land around the Puget Sound had been growing undisturbed. One can conjure up images of these giant trees surrounding bear, elk, osprey, racoons, and the numerous tribes of the Salish Sea region, living out their lives among the giant Douglas Fir, Western Red Cedar, and Hemlock trees of the area. Today, we can see the clear-cut areas where logging has wiped out old forests and where young trees are growing back in their place.  At places like Lake Cavanaugh, in Skagit County, Washington, you can still see a few gigantic old tree stumps, wise guardians, representative of the giant old growth forests of the past. Forests that the Yale Climate Connections site calls “giant bank accounts of carbon – they store an enormous amount of carbon in their trunks, and allow even more to be stored in forest soil. Although scientists had long thought old trees can no longer absorb carbon, recent studies suggest they continue to capture large amounts into old age.”

Flash forward to The Webster School, built in 1908. The Webster School served the Ballard, Seattle community as an elementary school until 1979 before it was leased, in 1980, by the Nordic Heritage Museum when many rooms were remodeled to house museum exhibits. In 2018, the building changed purpose again and this remodel is how the star of our show was taken out of use in the Webster building and made its way into our design. It’s noted on the sales list for our purchase that it’s a door of exterior thickness but was an interior door. Perhaps it was a typical classroom door in the school that needed to be extra strong? Some answers we may never know, but doesn’t this add to the mystique and story of it all?

We had a fun exchange about this with one of our collaborators and got a tip that it may have been manufactured by OB Williams. After a few email exchanges the oldest reference was a 1920 catalog that had doors that weren’t exact, but incredibly close. If our door was manufactured ~10 years prior, it could definitely have come from this company.

As a resident of the Pacific Northwest, when it was time to find a new door for our beach cottage in Long Beach, Washington, it felt important to first consider sourcing our door from a reuse business. The concepts of “redevelop vs. develop,” “Adaptive Reuse,” “Creative Reuse,” and the practice of transforming and reusing at the same time is more important as we consider what’s happening to our forests, our oceans and waterways, to our soils due to over production of “stuff,” and the fact that so many items that still have plenty of life in them are ending up in landfills which produce roughly 50 percent methane and 50 percent carbon dioxide into our atmosphere. As Travis Albrecht, AIA, Studio director at Gensler, notes about their work on Upcycle in Austin, Texas, an award-winning project for the AIA Committee on the Environment focused on sustainability: “The idea of repurposing buildings to save on the embodied carbon and on all the energy that goes into producing the materials that make buildings – we will probably see a lot more of that. It’s a conversation we’re having more and more with our clients.” It’s a conversation we at AKJ Architects are interested in having to support greater sustainability, and our friend Old Fir is just one small conversation of many to come. Conversations more and more people are finding important to have as they plan their home remodel and addition projects.

The bonus to these conversations is the element of story that comes with obtaining reused items, upcycling and transforming existing structures. We explore a story that’s been unfolding, a story to be a part of, and a story to share. Story telling taps into the human tradition of oral history, bringing connection and depth to our life experience. I’ll leave you with this question – When does human connection and making the most of the resources on our planet become more important than using up those resources for less meaningful purposes? I would say, “Now.”

Arlene brings over twenty-five years of design experience to her company. As a professional who strives to provide exceptional customer service, creative design skills, and an eye for detail, AKJA has the experience and training to lead your residential project from concept through completion.

Arlene received her Master in Architecture Degree from Massachusetts Institute of Technology, her Master in Science in Interior Design from the University of Massachusetts and her Bachelor degree from Skidmore College with a major in Art & minor in Spanish. Arlene's combination of creative degrees in Architecture, Interior Design and Fine Art give her a holistic approach to residential design and enable her to quickly comprehend and efficiently collaborate with other professionals. At MIT, she coupled her studies with graduate courses at the MIT Center for Real Estate where she studied business. Since a young age, Arlene has had numerous academic opportunities to travel throughout America, Europe and Asia and learn about art and culture throughout the world.

Since 1987, Arlene has been privileged and trusted to work on residential and commercial projects with multi-million dollar budgets. She has managed all phases of residential design, architecture, and construction for well-established Seattle architecture firms such as Sullivan Conard Architects, NBBJ, and General Contractor Toth Construction, a Seattle based custom residential builder. Arlene launched her own firm in 2007 to design new and renovated homes, cabins and condominiums ranging in size from 500sf to 10,000sf. She brings passion, creativity, a commitment to succeed, and a powerful blend of skills, education and experience to every residential architecture project.

Stacey Lara has a wide range of experience specializing in efficiency and human wellness. She's a transformational coach with an administrative background in the medical, engineering, landscape architecture and architecture industries. 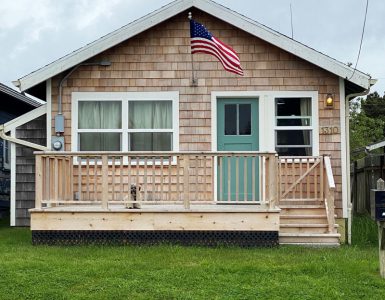 In today’s story, Old Fir completes its transformational journey and joins an ensemble cast including windows, shingles, lighting, address numbers, a flag holder, and a new deck with a gate in a front-wall beach cottage... 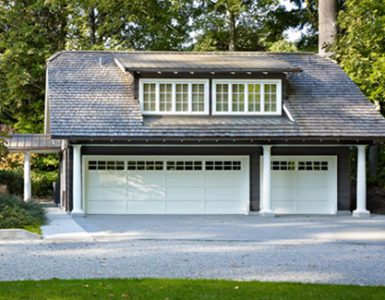 In this blog post, we’d like to give you an idea of what it’s like to add an ADU or DADU (Detached Accessory Dwelling Unit) to your residential property, to help you make an educated decision about whether this is a... 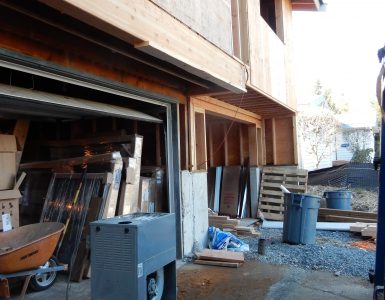 A successful remodel or addition starts with hearing the client’s problems, creating design solutions that demonstrate a clear understanding of their goals, and developing a plan to execute the project successfully...

Don't be shy, get in touch. We love meeting interesting people and making new friends.

Tips for Living Through Your Home Renovation Project

Excavating, Renovating and Adding to your Basement in your 100-year-old Seattle Home